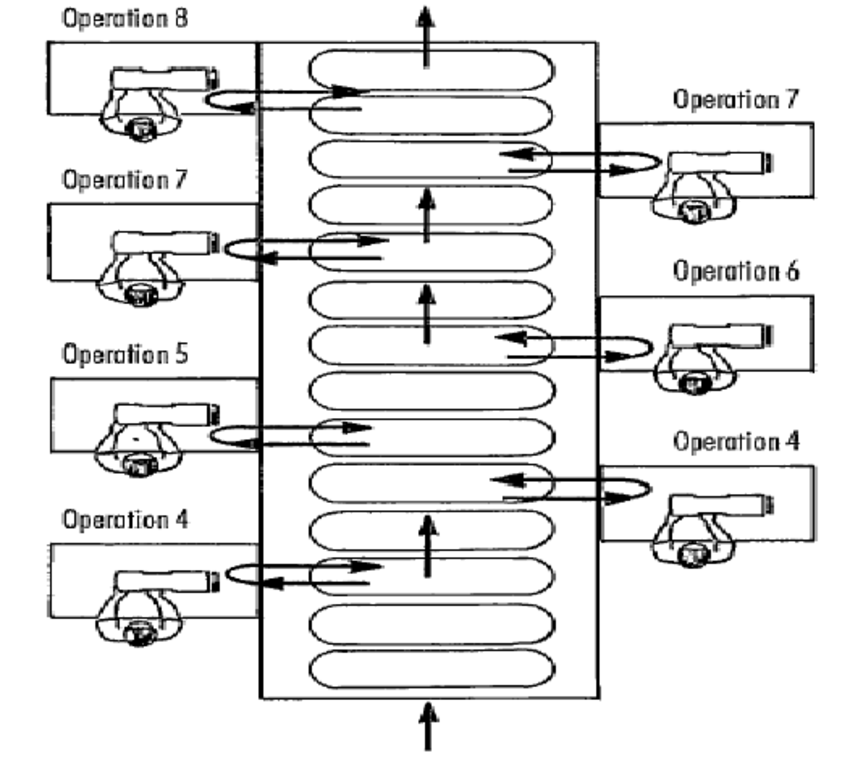 This kind of system is built on synchronized or harmonized workflow at each step of the production process. Time synchronization is a crucial aspect of this process since the synchronization of workflow cannot be achieved if there are more fluctuations in the standard times (SAM) of specific operations occur.

If one of the operations is running at a SAM value of 1.7 minutes Then all the other operations on the production line will be the same or a similar SAM value. The balancing of the standard time of each operator can result in bizarre combinations of complete or partial operations that may reduce the effectiveness of each operator. The structure of a synchro-system to allow manufacturing a complete sleeves shirt is depicted in Figure 3.

This PBS synchro system isn’t adaptable and is susceptible to breakdowns frequently of equipment and increased absenteeism. Standby equipment and operators need to be available to prevent delays each time. In addition, this system requires an adequate amount of similar-style clothes to ensure uninterrupted operation.

Production system for units (UPS) for the production of clothing:

As a mechanical system, this is in use for a long time, but the first major leap forward was created in 1983 when computers first began to be used to control, plan and manage how workflows within the system.

The unit production system, also known as UPS is a reaction to competition pressure due to the increasing demands of consumers and global competition. The UPS system is based on the use of an overhead transportation system that is automated that can transport the units from one location to the next, instead of requiring the human hand handling of materials within this bundle structure.

While this production system was in operation for several years, significant improvements were achieved when computers were used to assist with manufacturing planning control of production and regulate the flow of work on this production line.

The most important characteristics of the UPS production system include:

The operating principles of the unit production (UPS) are as follows: (UPS) is as they are:

The entire components of a garment are loaded into a container on a working station specifically made to accommodate this use. The carrier is split into sections, with each featuring a quick-release clasp that keeps the parts from falling out while moving across the device. When a collection of garments is loaded onto carriers, they are fed through an electronic or mechanical device that registers that number on the carriers, and then routes it to the initial destination. Some of the most sophisticated systems identify the carriers with all destinations they need to go through to completion.

The carriers that are loaded are transferred to the main powered line which is constantly circulated between machine rows. The principal or the headline is linked to each station via junctions which are open automatically when the work of a carrier is directed to the station in question. The carrier is located to the left of the operator. It then is waiting for its turn, along with the other carriers at this station (Figure 4).

Once the operator is finished with the work on one carrier the button on the back of the machine is activated, and the machine then triggers the mechanism, which then takes the machine back to the mainline. When one carrier is removed from the station, a new one is automatically fed in to replace it. After the vehicle leaves the station, it’s stored in the data collection system and then it is directed to the next station.

Production systems for units require substantial expenditures, that isn’t always justified using conventional pay-back calculations. In addition to the tangible advantages, UPS also have many intangible benefits, like an easier and more well-controlled flow of work and the capability via the control system to simulate the production environment several times ahead of time. These intangibles are hard to quantify, yet they can make a huge part in the performance of the system.

In all likelihood Unit production systems offer significant advantages over all manual and mechanical systems utilized for the production of clothes in mass quantities. They provide an apparel factory that can respond rapidly to any change that might happen. In the highly competitive fashion industry, it is crucial.

The advantages of the Production of garments with a higher level of efficiency:

Advantages of UPS in the production of garments:

Comparison of PBS and UPS: PBS with UPS: UPS:

Within clothing manufacturing businesses, a variety of sewing machines are used. The proprietor of the garment manufacturing facility purchases these machines according to the quantity of production, the variety of products as well as the expense to purchase and maintain the machines. The PBS is the most commonly used sewing system currently. The pieces of cut are manually moved along the line of feeding by assistants. The operators move the bundles by themselves to finish the required task and then shift until the following operator. As technology advances, mechanical systems for transporting materials are being introduced. An overhead transport system, also known as UPS can transport cut pieces of material that are hung on hangers (one hanger per piece) through an automation system. It helps reduce manual handling and transportation and also has other advantages in comparison to the PBS.

The modular method of production is largely derived from the Japanese auto manufacturing process and is believed to be a way to accommodate the varying requirements in the apparel industry. This modular approach, even though it was first introduced in the 1980s, it is one of the most recent production methods in the world of clothing. It is also known as a cellular or team system. Market segmentation has increased and the necessity for shorter production cycles and more operational flexibility, along with the fierce competition within standard products from countries with low wages and the like, have forced manufacturers of clothing to test this new production technique. Modules employ a cross-training method that requires multi-skilled workers and a limited number of machines to create an end-to-end garment. The main principle is a worker/operator involvement and teamwork, which demands significant changes to the Human Resource (HR) department. The employees are accountable for the quality of work. The most important elements that make up the system are the groups of workers who have multiple talents within a single module and group piece rate or the hourly rate, U-shaped modules as well as single piece handoffs. This type of system is known as Group Technology or cellular manufacturing. A lesser amount of material handling significantly reduces inventory levels and production time, which helps reduce the cost of inventory as well as the handling of materials.

The advantages of a modular clothing Production system

The disadvantages of a modular manufacturing system

processing time The Processing time is the sum of the amount of time that is spent on the steps involved in assembling the garment.

Transport time This is the entire time spent in the transportation of finished or semi-finished garments from one workplace or department to the next.

waiting time for incomplete garments The idle period for a working bundle while it awaits the next task to be completed.

The selection of the best clothing production process will be contingent on the policies and products of the business and the capabilities of employees. The primary objective of all production methods is to cut down the production process time, which results in lower costs for inventory. The choice of the right garment production method for a particular industry is determined by the fashion of the products and the policies of the company as well as the capacity of labour. The cost of inventory determines the decision to choose an appropriate production system in the majority of conditions in the industry of apparel. If the material, labour cost, space and interest are very high a synchronized subassembly method that allows for the smallest amount of inventory in the process is the best choice.