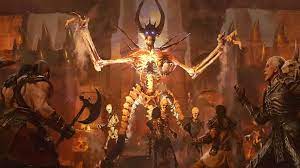 An action RPG game developed by Blizzard Entertainment in 2000, Diablo 2 projects a theme of dark fantasy and horror. The storyline continues after its prequel, Diablo, and the game is assigned with a new character. His goal is to stop the destruction unleashed by Diablo’s return. The game has five acts that offer a variety of locations and settings for you to explore. With an increased number of characters to play and interact with, Diablo 2 can be thrilling and entertaining for vintage strategy game-worms.

Added features and changes made in Diablo 2 remake

For the most part in the last decade, the franchise was essentially out of the limelight. You can even say that it was dead. But, in 2021, the franchise made a huge comeback with the Diablo 2 remake, Diablo 2: Resurrected. Gamers are thrilled and a bit surprised with the release of the remastered version of the vintage RPG game, Diablo 2. All in all, both old school gamers and modern gamers are happy about it and they have all joined the battle to take their characters to the next level.

As all remastered games come with significant changes, the developers released the Diablo 2 remake packing with highly coveted features. The most well-known features and changes made to the Diablo 2 remake, known as Diablo 2: Resurrected are:

Today, we are no more using Windows 2000 and Windows XP. The games developed during that period were only compatible with the operating systems of the same. So, if you try to run the original Diablo 2 on windows 10, you need patches, mods, and you have to screw with the system settings. Even after all your struggle, the game might not be compatible with your current operating system.

What’s a remaster without an improved visual effect? It’s 2021 and video game graphics have risen to a new level. During the alpha stage of testing, Blizzard brought in gamers to test the game and obtain accurate feedback. As a result, the developer reanimated and redesigned the visual effects of spells and other special attacks.

As expected from a remastered game, the Diablo 2 remake has embraced 3D graphics. And this could probably be the most noticeable change among others. After the release of the original Diablo 2, many gamers have wanted to try it during the last two decades. But the only reason that repulsed the intrigued gamers is outdated visuals. So, the refreshed look will attract both vintage Diablo fans from the 00s and the gamers of today.

Along with graphics, the department of sound in gaming has also evolved too. There is a great difference between the sound effects of a game two decades back and the same of today.

In the original game, the combat and sprinting sound effects are simply outdated if you compare them with the sound quality standards of today. The remake comes with updated sound effects including diverse footstep and action sounds.

In Diablo 2: Resurrected, you’ll get satisfied just by hearing the sound effect of something as simple as removing gems. With remastered audio effects, you get to perceive Diablo 2 in full Dolby 7.1 surround sound. An immersive audio experience including crystal clear gameplay sounds is undoubtedly a strong reason to play Diablo 2: Resurrected.

The concept of automatically picking up loot wasn’t perceived back in 2000 when the game was released, so no action RGP games had it. It was difficult to implement because of limited software functionality and no one cared that much too.

But the auto pick-up mechanism of gold and other collecting items have been in convention in action RPG games for a while now. Diablo 3 and various other similar hack-and-slash games released recently has it.